Posted on Thursday, December 22, 2011 by ladypreacheratwork

I was first scheduled to visit the Christian schools of our partner church in Fang and Chiang Rai on September 29th and 30th.  Unfortunately, the Ping River in Chiang Mai decided to explore a region of the city beyond its banks on September 28th and I was literally housebound for three days until the flood water receded.  To find the cities of Fang and Chiang Rai on a map of Thailand, first find the northernmost tip of Thailand.  Then, follow the main highway into Thailand from Myanmar (Burma) and you will find Chiang Rai fairly easily.  Look off to the left of Chiang Rai and you will have to search to find the much smaller city of Fang.  Both cities are in the foothills of the Himalayan Mountains and it is beautiful country to drive through at any time of the day.   However, everyone else in the van had already seen this part of the country many times, so my photo was taken from a moving van in the evening on our way home and does not do the countryside justice at all. Imagine rice paddies and orchards of banana trees, small hills covered with corn, and mountains off in the distance. (Smaller thumbnail photos are also below.) 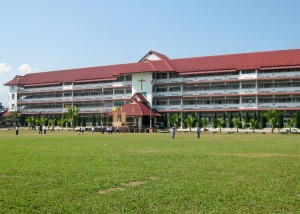 The New Building for Grades 1-6 in Fang

The Christian schools in Fang and Chiang Rai are both large, with several thousand students in grades K-12 at each school.  Established over 100 years ago by Protestant missionaries, the schools have provided a consistent Christian witness in these communities for many decades.  Each school has a handful of foreign teachers who are teaching English as a second language to the students, but with several thousand students, they are stretched thin.  As a result, the children may only get two hours a week of instruction in English, which is a problem if they plan to get a job using English after they graduate.  The Thai teachers of English at Rangsee Wittaya School in Fang expressed their frustration at not have the resources they needed to teach at the level they wanted to teach.  We talked about some low budget/no budget things they might try immediately. I also promised I would recruit volunteers for them and return several times each year to listen, observe, bring new ideas and organize some seminars for them.

I did have the opportunity to tour the campus and have a private conversation with the English Department Head. As we walked around the campus (when I took the photo of the new building), we passed a class of students who were learning the art of Thai classical dance. It is part of the Art and Culture of Thailand curriculum that all students study in school.  Of to the right, you can see a small gazebo built in typical Thai style that offers a place to sit out of the sun.  It is not uncommon to see these gazebo-like structures along the road where they are used as bus stops or a place for Buddhist monks to rest as they make their daily rounds.  Several students were sitting in this one, observing the dance class. 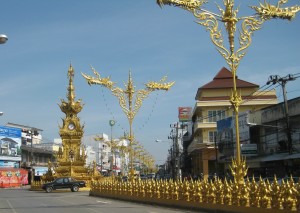 Clock and Lampposts on Main Street in Chiang Rai

We left Fang in late afternoon to make the two-hour drive through the mountains to Chiang Rai.  When we arrived, we drove down the main street to the center of town where I discovered this beautiful ornate gilded clock that was created by a well-known Thai artist at the request of the city fathers. (There is another photo below.) He also created the lampposts in the median stretching down the main street in both directions away from the clock.  At night, the clock is lit with lights that change color.  We had dinner at a  restaurant on this street.  For $3, we got rice, soup, and two entrees. I chose a creamy curry and a vegetable stirfry.

Ajarn Chonchineepan at a Student Exhibit at Chiang Rai Vidayakome

I was traveling with a group from the Education Ministry Office.  Ajarn Narate has expertise in several areas including School Administration, Christian Education and Music. Ajarn Chonchineepan also has expertise in several areas including Christian Education, International Student Life, and Management. Both are fluent in English. Recently, Ajarn Chonchineepan agreed to help me recruit volunteers, so we have worked together on some letters and posters and contests to get the word out. Next month, the students in our 26 schools will design a new logo for the CVT (Christian Volunteers in Thailand) Program. Entries are due by January 31st and the winner will be announced on February 15th. The winning student will receive 500 THB (about $17) and we will use the winning logo on our stationery. Ajarn Chonchineepan developed the poster for the schools and wrote the cover letter explaining the contest. 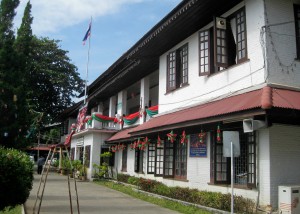 The Oldest Building on Campus in Chiang Rai

Once again, after meeting with the Manager of the school and the English teachers to talk about the CVT Program, the impact of ASEAN (see my blog post on September 22nd), and resources available to support our English teachers, I wandered around the campus taking pictures of the things that caught my interest.  The Manager, Ajarn Sataporn (who is married to the Director of the school in Fang), told me, with a great deal of pride, that this building was the original building on campus and is now one of the oldest buildings in the city.  Built by Protestant missionaries, this building is 106 years old.  They no longer allow students on the second floor because it is too dangerous.  They have several newer buildings where regular classes are held. 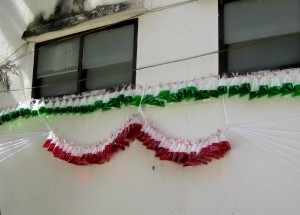 Simple Christmas Decorations at the School

Chiang Rai Vidayakome School had a contest, challenging different classes to decorate an area of the school for Christmas. Ajarn Chonchineepan is standing by one of those areas.  Another area that caught both of our attention was this: Hanging plastic bags filled with red and green water.  We saw colored paper stars hanging from palm trees, cotton snow – the only kind of snow that Thailand receives – decorated another area. It is amazing what young people can do with very little money and some creative thinking!  We wish you all a Merry Christmas!

The Clock in Chiang Rai

On the Road from Chiang Rai to Chiang Mai

For more information about me and my ministry in Thailand, please select the 'About' tab in the header above.
View all posts by ladypreacheratwork →
This entry was posted in Uncategorized and tagged challenge, culture, daily life, education, God at work, people. Bookmark the permalink.