In Memory of a Beautiful Woman

Posted on Saturday, February 4, 2012 by ladypreacheratwork 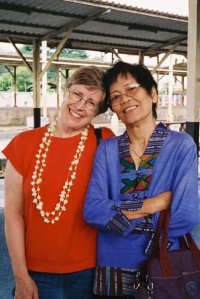 My Sister, Carol, with Sunee During Carol's Visit in 2008

No one remembers the exact day, except that it was more than 50 years ago.  A young Thai Christian woman was sent from Chiang Mai to Nakorn Srithammarat to be a witness to the glory of God.  She had leprosy and had been rejected by her own family. She had come to McKean Rehabilitation Center in Chiang Mai, a Christian center for the treatment of leprosy in Southeast Asia. There, she was treated for the disease and there she learned of the love of God.  She worked as a secretary for the Marberger Mission at McKean. She also completed a Bible study course and was then sent to South Thailand to share what she had learned with others. My mother met her there. Sunee Sa’adprai was lonely and afraid, far from home.  My mother had just moved south to serve Bethlehem Church in Nakorn Srithammarat with my father, leaving almost all of her children in boarding school in Chiang Mai. Somehow, God put them together and, together, they formed a new family. Sunee became the daughter that filled the empty space in my mother’s life and my mother became the mother and mentor that Sunee needed.

Mom was a nurse by training and, in her first visit to the government leprosarium in Putong, she saw the need for someone to help the leprosy patients care for their feet. (Leprosy deadens the nerves and the patients would cut themselves and not know it. The open wounds would develop abscesses.) Mom went each week to teach the patients how to check their feet and wash and dress their wounds. Each week, she built her relationship with Sunee and they became intimate friends. Sunee would ask Mom about many things she did not understand about life and about her Christian faith. She loved to study the Bible and she memorized large chunks of it. Sunee also loved to sing and she memorized many hymns in the hymnal, singing them all the time.  When she married, she sought Mom’s counsel.  When her first child was born, she sought Mom’s counsel. Two other children (all girls) followed and Mom delighted in these grandchildren and eagerly followed every story of their lives.

Mom with Sunee's Second Daughter A and Her Daughter In

Sunee returned to Chiang Mai to work at McKean Rehabilitation Center. Her husband was hired to haul medical supplies by truck wherever they were needed.  The children grew up, attended Christian schools (Dara Academy) and all went on to university. When Dad was assigned to be the Director of McKean Rehabilitation Center in 1976, it was a move that brought Mom and Sunee back together again. Their friendship grew even stronger.  When Mom and Dad retired from the mission field in 1986, they shed many tears on parting from Sunee and her family.  Fortunately, the Church kept calling Mom and Dad out of retirement for many short-term assignments, giving them many opportunities to see each other again.

Mom Holding Navee, born in 2011 the Newest Great Grandchild from Another of Sunee's Daughters

Mom’s return to Thailand last year fanned the flame of this old, intimate friendship again. Once again, mother and daughter were reunited. Each time that they spent time together in the past year, I heard lots and lots of stories of days gone by.  I  also heard much laughter and singing and tears. This was also a time for me to re-establish my connections with Sunee and her three daughters. One daughter, Oi, is a nursing manager at McCormick Hospital. Another, A, is a professor at Payap University. A third daughter, O, is managing a chain of restaurants in Chiang Mai. Their children, who all call Mom “Grandma”, make another generation of family for for Mom to love as she loves all of us.

My sister, Sunee died last Monday morning from a combination of cardiac and respiratory problems arising from poor health in her early years. She had been in poor health for the past few months. I had taken Mom to see her in the Cardiac Care Unit of McCormick Hospital on Sunday afternoon.  This entire week has been a joyful celebration of her life and a very, very long friendship. Lots of tears have been shed.  Lots of hymns have been sung.  Many, many people have paid their respects. There is a huge hole in our lives, but there is a wonderful sense of peace for we know that she is with the Savior she loves and no longer bound by the body that became such a burden in recent weeks.  Yes, we know that our Redeemer lives and because He lives, we too shall live!

For more information about me and my ministry in Thailand, please select the 'About' tab in the header above.
View all posts by ladypreacheratwork →
This entry was posted in Uncategorized and tagged God at work, history, people. Bookmark the permalink.

1 Response to In Memory of a Beautiful Woman