Posted on Sunday, October 27, 2013 by ladypreacheratwork

Nellie with my Sister’s Neighbor in Seattle This Summer

While I was in Bangkok, my little Miniature Pinscher, Nellie, stayed with Mr. Sawai Chinnawong, my artist friend, and his family. Nellie is not a young thing any more with at least twelve years of living under her belt.  That makes her a senior citizen in the dog world – about 84 years old in human years. Still, she is a feisty little dog who loves to run and play and can jump straight up in the air about waist-high. She adores Mr. Sawai, mostly because he lavishes affection on her and spoils her with treats that she does not get at home. 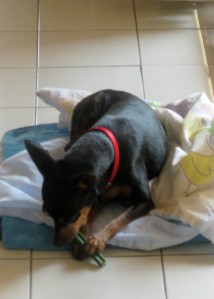 Nellie with a Chew Stick

As the story goes, Mr. Sawai was out in his yard with Nellie, watering his garden.  She had wandered off into another part of the yard when two stray dogs discovered her. These much-larger dogs attacked her. Mr. Sawai heard her cries and came running, chasing the two larger dogs off. He then carried her bleeding body with one arm while he drove her to the animal hospital by Chiang Mai University with his other hand. (Thank heavens, he has automatic transmission!)  Nellie was treated for her wounds and admitted to the hospital for observation.  The doctor said that they would have to operate as some of her wounds were extensive.  They gave her intravenous fluids and made her comfortable for the night.  The next morning, they operated.  They told me that they would call if she was failing, but I did not receive any calls. Mr. Sawai went to visit her later that day and reported that she seemed to be OK.

Nellie with Mr. Sawai at the Hospital

It was several days before I got back to Chiang Mai and could see her myself.  When I went to the hospital to visit her, she was wrapped with bandages from her neck to her knees.  The worst of the damage was to her chest on the right side and to her left hind leg.  The doctor had operated on both to repair the damage. She still had a drainage tube in her chest (held on top of her back by the pink bandages), but she was glad to see me and spent some time telling me just how dissatisfied she was with my care of her. After a while, she calmed down and I just held her and petted her until it was time to go. 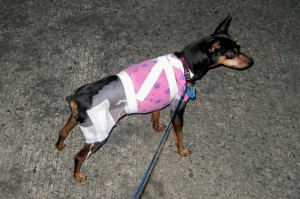 Nellie at Home Two Weeks After the Incident

About a week after she first went into the hospital, she came home to my room on the third floor of the Education Ministry Building. They had removed all the stitches and her chest tube. Needless to say, I had to carry her up and down the stairs for the first week and she was weak a feverish for a few days. But I was surprised at how quickly she bounced back and was willing to try the stairs herself. Of course, that was more “game” than ability, for her left rear leg was still weak and collapsed under her if she tried to do too much.  Mostly, she ate and slept and forgot what it meant to be “housebroken.” 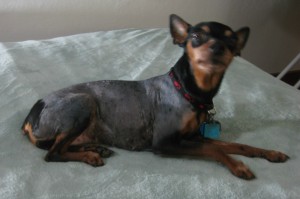 This week, she is a different animal!  She runs up the stairs (four flights) without any problem.  She wolfs down her food as she did before all this happened.  I have changed her food from mostly dry to mostly wet as she lost some teeth in her battle with the larger dogs. Her wounds have healed and, while she spooks easily and sticks close to my side outdoors, she is mostly her old, feisty self. She has also remembered what it means to be “housebroken” – thank heavens!  She wears some doggie clothes now that her bandages are gone, for the rains have stopped and the weather has turned cooler. She has very little hair on her body – just battle scars – but I am glad she is alive and back to her old ways!

Blog Postscript (2 November 2013): Mr. Sawai told me only today that, when he took Nellie to the Animal Hospital after the attack, the doctor gave her only a 50/50 chance of survival.  I am so thankful that she did survive and so grateful for the skill of the surgeon on that day! God is good.

For more information about me and my ministry in Thailand, please select the 'About' tab in the header above.
View all posts by ladypreacheratwork →
This entry was posted in Uncategorized and tagged art, challenge, dog, expectations, God at work, people. Bookmark the permalink.

1 Response to A Close Call