Posted on Monday, June 23, 2014 by ladypreacheratwork 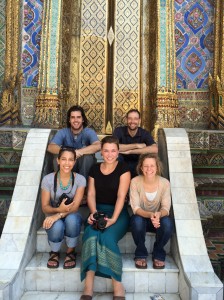 ELCA YAGM Visitors at the Temple of the Emerald Buddha

When friends come to visit, one of the joys of my life is to take them to places where I have been and show them some of the things that have captured my heart.  When a small group of ELCA (Evangelical Lutheran Church in America) people connected with the YAGM (Young Adults in Global Mission) program visited Thailand in May, I found time to take them to the Grand Palace and the Temple of the Emerald Buddha. Because the Temple of the Emerald Buddha is considered to be the holiest site in Thailand and because the Grand Palace is one of the “must see’s” of Thailand (The top tourist destination by far), it is kept in immaculate order and is always a breathtaking sight (site) to see! But it is always jammed with tourist from all over the world. On this day, we spent three hours all told – one hour traveling to and from the Grand Palace and two hours wandering, looking and taking photographs of the stunning beauty of the place.

The Ramp for the Garuda Image

One of the sights that is rarely seen during a tour of the Temple of the Emerald Buddha and the Grand Palace is the effort to restore parts of these magnificent building as they age. Months ago, I noticed that they were changing the roof tiles on one of the buildings at the Grand Palace.  To do so, they had to remove a large Garuda image that hung from the corner of the roof.  In two subsequent visits, even though the roof tiles had been replaced, I noticed that the Garuda image was still missing. However, during this visit in May, I saw that the wonderfully restored Garuda image was being prepared to be lifted back into place.  To understand the challenge of that, please refer to the photograph to the right. In this case, the picture is definitely worth a thousand words. 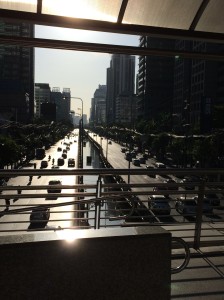 Bangkok Traffic the Day After the Coup

A trip to the Temple of the Emerald Buddha and the Grand Palace is not an easy undertaking. Getting to the Grand Palace is a challenge because Bangkok traffic is always horrendous. During the hot season when temperatures easily top 100 degrees Fahrenheit, there are no air-conditioned areas to enter to escape the heat.  The only hope is for a slight breeze or a spot with some shade.  I always encourage people to bring an umbrella – not for the rain, but to escape the glare of the sun – and a bottle of water to restore the liquid that your body loses naturally on a hot, humid day. During the rainy season, there are precious few places to escape Thailand’s tropical rain, which pours down in sheets.  That umbrella, once again, becomes a life saver. The cool season – October to February – seems to be the best time, but several million other people have also figured that out and the two places are jammed with tourists all looking for the same view. With this group of new friends, I discovered that the day after a coup d’état is the best day of all. The streets in Bangkok were virtually empty and so was the Grand Palace.  Of course, planning that might be a little difficult!

The Temple of the Emerald Buddha

Detail of the Wall of the Temple

The Balcony of the Grand Palace

Looking across the Grand Palace

Seen in a Bangkok Skytrain Station