A Month of Goodbyes

Posted on Tuesday, September 10, 2019 by ladypreacheratwork

The good news is that the rains finally came to Thailand and, fortunately, some of the rice crop was saved.  Unfortunately, many of the same places that were struck by the drought earlier this year have been experiencing once-in-a-lifetime floods as they received more rain than normal. It is a situation that is devastating for those who are barely making ends meet and struggle to put food on the table for their families. Please keep Thailand in your prayers.

August was a month of goodbyes. One of the most difficult for me was saying goodbye to Rev. James and Goodwill Riggins and little James Alex. An American Baptist who attended Pittsburgh Seminary, James was the first volunteer that I recruited back in 2012 and we have become good friends over the past eight years. During that time, the program has gone from nothing (with James often serving as my guinea pig) to a solid, well-articulated mission and ministry experience that receives strong positive reviews from volunteers and supervisors alike. It is hard to say goodbye to any and all of the volunteers, but as the first and the longest-serving, James holds a special place in my heart. James is now teaching at a university in China and completing his doctorate in intercultural studies at Biola University.

We also said goodbye to Aaron and Anna Silco, who came here last fall after being joined together as man and wife in a beautiful summer wedding. Both are enrolled at the Lutheran School of Theology at Chicago in Hyde Park. They took a one-year break from their studies and came to Thailand to serve the church in a new way – teaching at Bamrung Wittaya School in Nakhon Pathom. In August, they headed back to finish their seminary education and continue on the path to becoming pastoral leaders of congregations within the Evangelical Lutheran Church in America. They take the new skills they have in sharing God’s love with others across cultures that they have practiced with the teachers and students at the school. 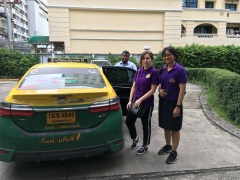 Bianka Walter climbing into a taxi with Ms. Atchima Wongkhiao to head to the airport

Then, we said goodbye to Bianka Walter, who came to us from Germany via England. A member of a nondenominational church, Bianka was completing an internship in hotel management for Sheffield Hallam University in London. Her internship placement was at a facility in South Thailand belonging to a large international hotel chain. She contacted us, frustrated by things she observed in that environment that were unchristian, and asked whether we might be able to help her find a Christian hotel management experience. We helped her to move to Bangkok Christian Guest House, a 55-room facility owned by the Church of Christ in Thailand in Bangkok. For the last six months, she has served there and completed her internship.

Bangkok Christian Guest House was established after World War II when missionaries returned to work in Thailand. They had been forced out of the country by the Japanese military forces that occupied Thailand during the war. Formerly the home of a missionary, it was converted to a Guest House to serve the needs of missionaries who had to travel to Bangkok to extend their visas or work permits. Its primary purpose throughout this time was to create a “home away from home” for those coming to Bangkok. During her tenure at Bangkok Christian Guest House, Bianka not only practiced her hotel management skills, but learned how to show the love and grace of God to every guest – and every employee. Before she left, Bianka shared with all of us the significant difference she saw between her experience with the large international hotel chain – where the management staff was only concerned with profitability and efficiency – and the Bangkok Christian Guest House. 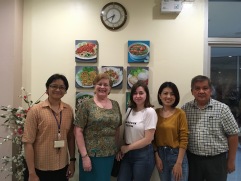 Mesetshou Losou, second from the right, at the Bangkok Christian Guest House

Finally, it is with a great deal of joy that I report that Ms. Mesetshou Losou, a CVT from Pfutsero Town Baptist Church in Nagaland in India, has been accepted to study at Truett Seminary of Baylor University in Waco, Texas. Mesetshou taught at Khoonchae Christian School in Chonburi for one year and then at Wattana Wittaya Academy in Bangkok for another year, sharing God’s love with the students at both schools. She is currently searching for scholarship funds to be able to begin her studies in January 2020. She plans to return to India after her seminary studies to serve God in the church there.

Thank you so much for the opportunity that you have given me to serve in Thailand and the support you provide through your prayers and your gifts to Presbyterian World Mission. Every day is a blessing!

1 Response to A Month of Goodbyes