Opening To A New “Normal”?

Posted on Monday, May 11, 2020 by ladypreacheratwork

For the past six weeks, we’ve seen a lot of vinyl banners like this one, telling us that the establishment – in this case, a beautiful Hindu temple on Silom Road – is not open for worship or religious ceremonies in order to mitigate the spread of COVID-19.  They closed their gates on March 23 and the banner does not specify when they will reopen.

This temple is actually quite small, taking up just a couple of city lots on the south side of the street. I have never been inside the temple itself, but have often peered through the gate to see what I can. What I have seen is that the courtyard inside is quite crowded, filled with colorful and very intricate religious artifacts, stupas, and pillars, which would make navigation tricky for anyone who is new. I can see how it would be impossible for worshipers to do any kind of physical distancing. Not an issue as, for the past six weeks, the gate has been locked tight.

According to the Wikipedia article on Sri Maha Mariamman Temple, it is the oldest and most important temple of its kind in Thailand. Back in 1858, when India became a British colony, many people from the southern state of Tamil Nadu preferred to leave India rather than live under colonial rule. One group of Indians, primarily made up of gemstone dealers and cattle ranchers, came to Bangkok. One leader of this group of Indians was Vaithi Padayatchi, who built this temple on Silom Road about a decade after the group arrived in Thailand. There is a little lane off of Silom Road that is named after him. 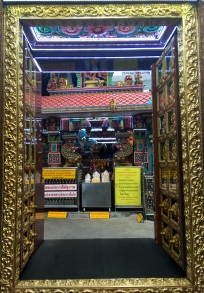 I usually take a morning walk just after dawn and this temple is on my regular route. It has been a walk on empty streets for the past six weeks, though the fresh market on the opposite side of the road is usually busy. Imagine my surprise this morning when I found the doors to the temple not only unlocked, but wide open.  I took a photo from outside the temple, as the orange sign to the left says that no photos are allowed inside. The yellow sign on the right says: 1. Everyone is to wear face masks. 2. Everyone is to have their temperature taken by an employee. 3. Everyone is to use the sanitizing gel provided. 4. Everyone is to follow the instructions given by the temple employees while they are inside the temple. 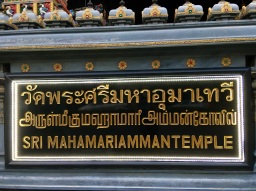 What? How? When? Those seem to be the questions that most people are asking regarding the effort to reduce restrictions that have been in place for the past six weeks.  While Christian churches are still providing virtual worship for their members, it seems that this space is now welcoming worshipers again.  Of course, today there was no one there. I will see how that changes over the days to come.